AgilityClick (ABN 76 699 077 212) is owned and operated by Steve Drinkwater and Cathy Slot from their home in Brisbane, Queensland, Australia.  Together Steve and Cathy offer over 50 collective years of dog training experience and over 40 collective years involved in Agility (including seminars, instructing, judging, administration and competition). 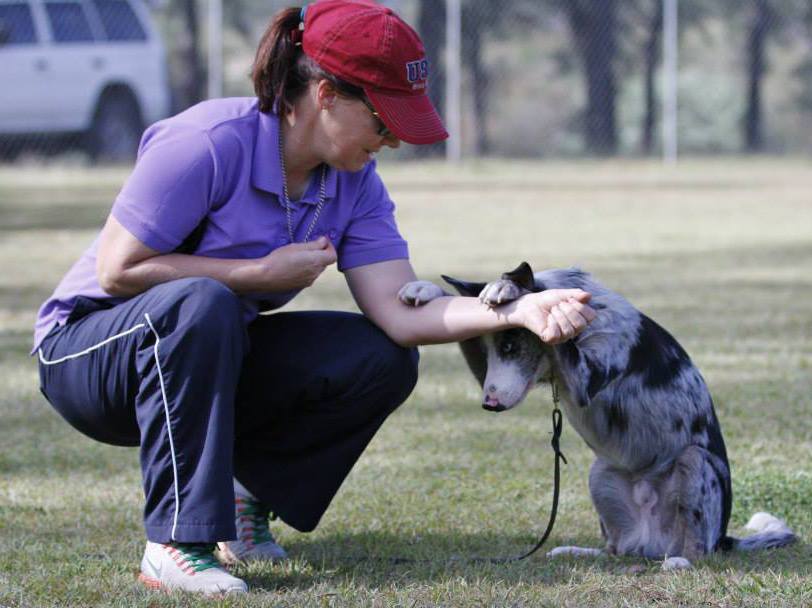 Cathy Slot is a successful Agility trainer and competitor. Cathy started Agility in 1992 with her male German Shepherd Dog (Zac) and whilst she remains an ardent lover of the breed she now has german coolies.  Currently Cathy is competing with her german coolie Axel (Axel-eration by Gelignite).

Cathy is the co-founder, and a Board Member, of the Agility Dog Association of Australia Ltd (ADAA) and a member of ADAA’s Judges’ Management Committee. She was the second handler in Australia to achieve a Master Australian Agility Dog (MAAD) title with her female GSD (Bo MAAD). Cathy was one of the first dog trainers in Australia to develop practical training programs using a clicker suitable for use in classes in her role as Chief Instructor and Committee Member of the Agility Dog Club of Queensland Inc (ADCQ). She has conducted seminars around Australia, and with husband Steve, in Malaysia. Cathy, along with Steve, was a co-founder and first results coordinator for the International Agility Link (IAL).

Steve Drinkwater has been involved in the development of Agility in Australia since he first started with his Kelpie Cross, Tessa AD, AAD, in 1989.  He has been on the Inaugural Committee of four specialist Agility clubs and also co-founded the Agility Dog Association of Australia Ltd (ADAA) in 1994.

Steve has conducted Agility seminars in New Zealand, Malaysia, England and Australia to teach handling skills, obstacle training and Judging skills.   Steve previously competed with his Australian Working Kelpie, Tommy AAC, MAAD 8, Gamblers Dog.   Steve and Tommy won the Purina Incredible Dog Challenge in 2000 at the Royal Sydney Easter Show and the ADAA Maxi Dog of the Year in 2002 and 2006 at the Grand Prix.  Steve and Tommy fostered a connection on the Agility field that saw the two work as a team in a free flowing, yet precise and efficient, manner.

Steve and Cathy formed Yunde Canine Enterprises (now called AgilityClick) in 1996 so they could publish a specialist Agility magazine.  The original American magazine, Clean Run (CR) began as a weekly newsletter in 1995.  In 1996 Cathy and Steve were granted the rights to publish/edit the Australian edition known as Clean Run Australia (CRA).   CRA first began as a weekly publication and soon progressed to fortnightly and then to a monthly magazine in 1997. In May 2003 Steve & Cathy published the last edition of CRA.

AgilityClick keeps in stock many Agility related books as well as toys and training aids.  Cathy and Steve completed their first book, written and published be themselves in 2001 based on training the beginner dog in Agility with the use of Click & Reward.

Cathy and Steve strongly believe in “quality not quantity”!  This ethos is seen not only through the retail efforts of AgilityClick but in their efforts to promote the sport of Dog Agility.  For every hour they spend working with AgilityClick they give back four hours working as volunteers for non-profit organisations such as the Agility Dog Association of Australia Ltd (ADAA) and the Agility Dog Club of Queensland Inc (ADCQ).

Note: This is separate from user registration for orders and classes/seminars.